RCM, The Royal Canadian Mint, had its earliest start when then Governor General Earl Grey watched with a group of dignitaries as the very first fifty-cent piece was struck. This was the beginning of domestic precious metal production, and established the Ottawa branch of Britain’s Royal Mint. RCM has plants in Ottawa and Winnipeg and offers tours for the public. The Winnipeg plant mints circulated coins and the Ottawa plant mints all the bullion and collectable coins, many made by hand.

The Royal Canadian Mint (RCM) is the sole manufacturer of coins for Canadian circulation and they mint coinage for several other nations. As other mints have done, they followed suit in producing other precious metal products such as watches, medallion coins, jewelry, and more. They are a Crown corporation that is operated under the authority of the Queen, but are administered by the President and CEO who is referred to as the ‘Master of the Mint.’

The RCM sells bullion and numismatic products to dealers in Canada, the United States, Germany, the United Kingdom, Poland, France, Japan, South Korea, Australia, the Netherlands, and Italy. As the Gold Maple Leaf showed great success, RCM began minting the Silver Maple Leaf Coins in 1988, made with one troy ounce of .9999 pure silver. Each coin is valued at $5.00 CAD, which is the highest price for any equally minted and weighted silver bullion coin. Silver bullion and other RCM bullion products can also be purchased from banks, foreign currency exchanges, and brokerage houses around the world.

Weights and Other Coins 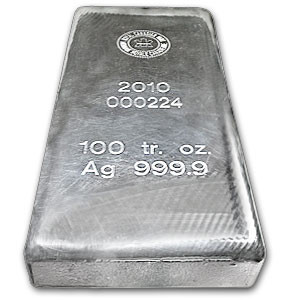 Each bar is struck with a unique serial number and carries the Royal Canadian’s Mint seal. They are often referred to as ‘RCM Bars’ and are shaped flat and uniform so they stack and store neatly and efficiently. They fit perfectly in safe deposit boxes and are the world’s only silver bullion bars that consist of .9999+ pure silver.

Silver is in demand and after the United States Mint announced they had run out of the 2013 American Silver Eagles, the Royal Canadian Mint experienced a surge in silver bullion and was forced to ration their own 2013 Silver Maple Leaf bullion coins. All of these shortages and runs on silver bullion indicate a trend that silver bars and bullion sales will continue to climb.

As of the time of this writing, Silver Maple Leaf premiums in the retail market range from $3 to $5/ounce, while premiums on 100 oz .9999 RCM bars are sitting around $1.50/ounce. These premiums are much inflated from the premiums during normal market conditions, as the enormous demand for silver has driven up premiums across the board.