Along with kangaroos, koalas are one of the most popular animals associated with Australia. Koalas are furry mammals, or marsupials—not bears. They have specially formed hands and feet to help them climb tall eucalyptus trees where they spend most of their time sleeping and eating eucalyptus leaves.

These adorable koalas are the featured Australian symbol embellished on the reverse of the Australian Silver Koalas, a silver bullion coin minted at the Perth Mint in Australia. They are acclaimed to be the driving success of the Australian Koala series.

The Perth Mint was established in 1899 as the third branch of Britain’s Royal Mint. Britain abandoned the mint in 1931 and the mint continued, expanding its refinery services to producing bullion. In July 1970, the State Government of Western Australia was transferred ownership of the Mint from Britain. With new vision, the mint was established as producing a wide variety of bullion and today, it stands as having the world’s largest range of gold and silver investment bullion coins. 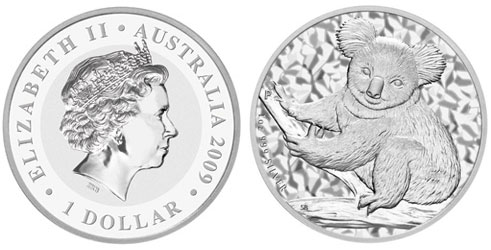 With new and artistically appealing designs each year, the Australian Silver Koalas have fast become another popular collectable coin. The lovable Koala has been portrayed napping on a tree branch, munching on its favorite food—eucalyptus tree leaves, perched in the fork of a tree with a young koala, and another with a koala carrying its baby on its back. The first issue in 2007 depicts a cuddly koala holding on to a gum tree branch with a whimsical look on its face. The background is a shimmery design with raised edges. All Australian Silver Koalas have a reeded edge.

The front of these coins is embellished with an image of Queen Elizabeth II designed by Rank-Broadley. Around the outside in the inscriptions, AUSTRALIA and ELIZABETH II along with each coin’s face value. The front side of the Australian Silver Koalas stays the same each year. Each coin is mint-marked with a “P” designating the Perth Mint as the minting facility.

The Australian Silver Koalas are minted to demand and there are no limits placed on quantities. The first year of minting, the Australian Silver Koalas sold at quantity of 137,768 and only came in a 1 oz size. In 2008, the four sizes were available and sold a combined amount of 115, 556 coins. By 2011, the total combined minted coins were 1,072,998.

The 2013 Australian Silver Koala bullion coin is decorated on the reverse with an adorable koala notched into the fork of a tree, looking out into the distance. The inscription is AUSTRALIAN KOALA with 2013, the weight, and purity of 999 SILVER. The coins come packaged in protective acrylic capsules to protect against oxidation and wear or damage.